It was a cold January morning in Monmouth, Oregon. The Columbia Room on the ground floor of the university center was filled with coaches representing all the athletic departments at Western Oregon University. About 30 people sitting behind tables set up in a circle, so an interactive conversation could take place.

The topic is not a typical one in the world of athletics. How often are these men and women asked to explore the meaning of masculinity – and to discuss what “health masculinity” might look like?

But that’s what they had gathered to do, facilitated in the discussion by representatives from two national organizations – Men Can Stop Rape, and Positive Coaching Alliance.

The Men Can Stop Rape website asks and answers an important question: "Why should you care about healthy masculinity? Because men who choose it choose to be strong without being violent. It’s a life-changer that benefits women and men.”

WOU one of 13 campuses involved across the country

This past summer, WOU was selected, along with 12 other universities across the country, to participate in a pilot program - the Healthy Masculinity Campus Athletics Project (HMCAP). This year-long initiative is funded through the U.S. Department of Justice, Office on Violence Against Women Campus Technical Assistance and Resource Project, and is an extension of the current Campus Against Sexual Assault (CASA) 3-year grant.

The goal of HMCAP is to "positively engage male college athletes, along with their coaches and the athletic administrators, as influential leaders in the prevention of sexual assault, domestic violence, dating violence and stalking on college campuses and in their surrounding communities."

This workshop was a continuation of a discussion about how healthy masculinity can contribute to violence prevention.

In August, 2015, WOU representatives John Wilkins (Coordinator for Campus Life and Student Activities) and Tom Kelly (Assistant Professor in the Department of Health & Exercise Science) attended an intensive three-day training emphasizing athletics’ leadership on social justice issues. They returned with a plan that addresses both prevention and response strategies. In October, Wilkins and Kelly brought the athletics coaching staff together for an introductory presentation and activities.

The most recent on-campus trainings began this past Monday morning, when Nick McGinty and Adrian Valdivia from Men Can Stop Rape led several sessions to help get the conversation going – inviting people to reflect on how our traditional (or stereotypical) concepts of masculinity may have negatively affected their lives. One session was open to all WOU students, another was exclusively for WOU male athletes. The female athletes were scheduled to meet the following day. 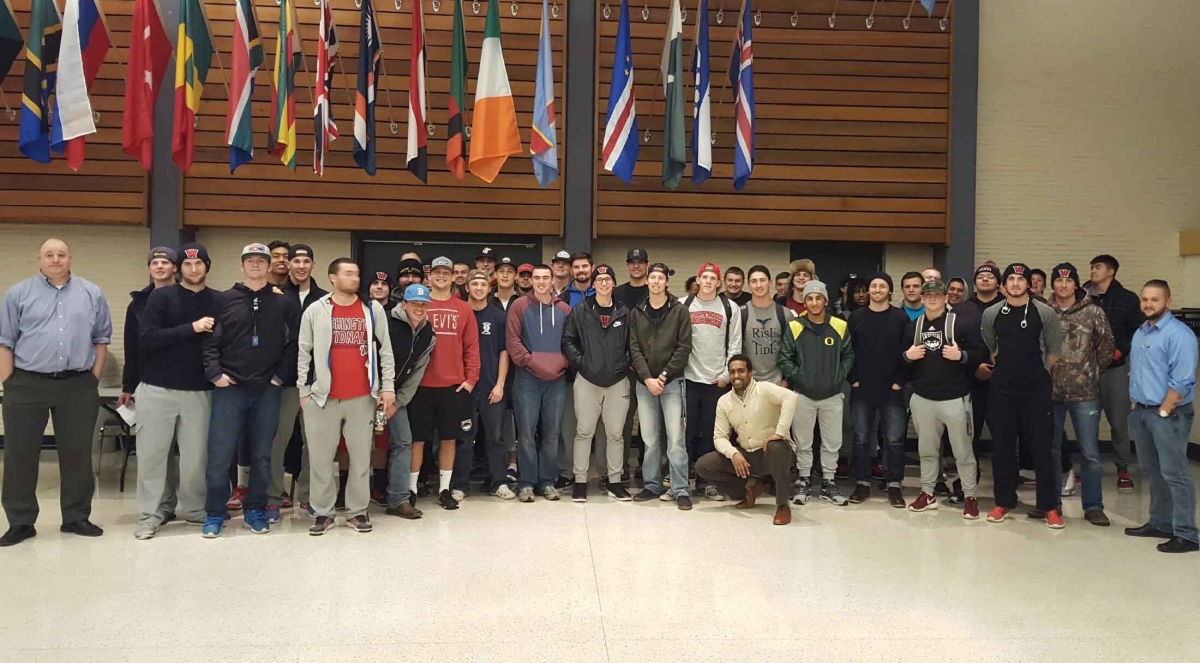 Learning about the Dominant Story

Then came Tuesday’s gathering of coaches in the Columbia Room. The conversation began with an discussion of what is meant by the term “dominant story” – a story we accept as true just because “it’s always been that way” or “it’s what everybody thinks.” There was a time when the dominant story, fully accepted by all but a mad fringe, was that the earth is flat.

For a more recent example, the coaches were asked if they knew where the tradition comes from of giving a diamond ring as a symbol of being engaged, based on the dominant story that diamonds equal love. It turns out that the DeBeers family, who has owned most of the world’s diamond mines for many generations, began an advertising campaign in the early twentieth century to sell more diamonds, and it sure did work.

And what if a dominant story is one that causes damage - “men don’t cry” for example? How does a culture (using that term in the broader sense of our national culture, and the more narrow sense of the culture on a college campus) replace an unhealthy dominant story with a healthier one?

The next series of activities during this gathering allowed the participants to explore the dominant stories being relied upon within the culture of the WOU Athletic Department – and probably sports and athletics in general. What became clear is that the sub-culture of campus athletics has a unique set of stories. Identifying which stories promote a healthy culture of non-violence and which do not, will be an interesting journey.

Kathy Toon, from Positive Coaching Alliance, spoke with the coaches about the powerful impact they have on the young athletes in their charge. “Coaches have an impact one way or the other,” she challenged the audience. “What will yours be?”

She asked the coaches present to imagine themselves at their own retirement party, and to think about what they’d like to hear their former students say about them. Not one coach responded that they'd like to hear about leading the team to a winning season. They wanted to hear that the students felt believed in, respected, pushed to be their best.

Kathy reflected on the concept of the dominant story that Nick and Adrian had introduced. She talked about the fact that many campuses are changing the dominant story that allows hazing, and replacing it with an expectation of pairing younger athletes with older ones to help them get oriented. She talked about how each campus can define its own culture by emphasizing “the way we do it HERE.”

This kind of work is not new to the students, faculty, and staff at Western. As a recipient of a Campus Against Sexual Assault (CASA) grant for the past 5 years (at WOU, administered through The Research Institute at Western Oregon University and Abby's House), WOU has implemented a focused effort to raise awareness around the issue of sexual assault, including the deep understanding of the significant role that men can play in preventing violence.

Men Can Stop Rape is a national organization whose mission is to "mobilize men to use their strength for creating cultures free from violence, especially men's violence against women."

Abby's House mission is to "provide the WOU community with educational programming, information, and referral services designed to promote equity and non-violence. We embrace a feminist model that empowers all people to actively stand against all forms of violence, harassment, verbal abuse, discrimination, and hatred."

The United States Department of Justice Office on Violence Against Women Campus Technical Assistance and Resource Project encourages institutions of higher education to adopt comprehensive, coordinated responses to domestic violence, dating violence, sexual assault, and stalking. As the mechanism for effectively carrying out the Mission of the OVW Technical Assistance and Resource Project, technical assistance is designed to provide campus program grantees with information, training, and resources to enhance their capacity to address violence against women while effectively implementing grant goals, objectives, and requirements.