By Mark Schalock and Louisa Silva 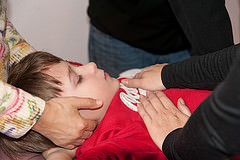 As has been recently acknowledged, almost all young children with autism have abnormal responses to touch. That is, they are overly sensitive or under responsive to touch or pain. Since touch is very important to a child’s development it has been suggested that these tactile abnormalities present a barrier that interferes with typical development.

Several randomized control trials conducted by a team of medical professionals and The Research Institute staff with preschool children with Autism Spectrum Disorder (ASD) have found that a “tactile stimulation protocol,” Qigong Sensory Treatment (QST) massage for autism, has been successful in normalizing responses to touch and decreasing the severity of autism. For example, by the end of two years of treatment touch had normalized by 73% and overall severity of autism has been reduced by 44% in children ages 3-5.

But what about older children?

This study for the first time seeks to determine whether the massage protocol is also effective with older children, ages 6-11.  Previous research hasn’t determined whether the window of opportunity for treating this “tactile impairment” closes after the age of six. This article reports the results of a small randomized controlled study evaluating treatment efficacy of QST in 35 children with ASD ages 6 to 11.

These results suggest the window of opportunity for treating tactile impairment in 6- to 11-year-old children with ASD remains open and that treatment can reduce the severity of autism in older children.